London is one of the most visited cities in the world. It is also comparatively a city with very little space. It has already expanded and is quite saturated in terms of accommodation for people  visiting London. Accommodation in London can be expansive. There are several options though.

If you are in London for a day or a week you can easily find a good hotel that will be the best solution. But if you plan to stay in London for several weeks or several months or years  you will certainly need an apartment. Apartment in London is usually called a Flat and to find a flat in London one has to search several web sites before hand .

The rent in London like most of the world is paid on monthly basis in advance however when people advertise they tend to put a weekly and yearly price. So it is always wiser to calculate the monthly price (i.e., rent x 52 / 12). In London a 1 bedroom flat in the centre of London (zone 1&2) you will find accommodation about £240/week.

Today London is a big city. Although London in the past referred to a small walled city but Today, London has taken on a much larger meaning to include all of the vast central parts of the modern metropolis, with the city having absorbed numerous surrounding towns and villages over the centuries, including large portions of the surrounding "home counties", one of which - Middlesex - being completely consumed by the growing metropolis. The term Greater London embraces Central London together with all the outlying suburbs that lie in one continuous urban sprawl within the lower Thames valley. Though densely populated by New World standards, London retains large swathes of green parkland and open space, even within the city centre.

Greater London consists of 32 London boroughs and the City of London that, together with the office of the Mayor of London, form the basis for London's local government. The names of several boroughs, such as Westminster or Camden, are well-known, others less so, such as Wandsworth or Lewisham. This traveler's guide to London recognizes cultural, functional and social districts of varying type and size: 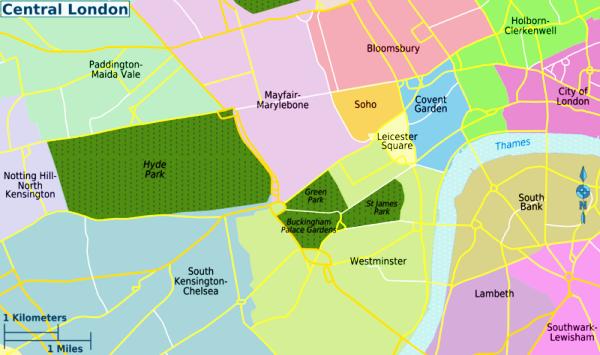 Map of Different Areas in & Around London

Central London
Central London and inner boroughs. Bloomsbury
Vibrant historic district made famous by a group of turn-of-the-century writers and for being the location of the British Museum and numerous historic homes, parks, and buildings. Part of the Borough of Camden.

City of London
The City is the area of London that originally lay within the ancient city walls and is now a major world financial centre.

Covent Garden
One of the main shopping and entertainment districts. Incorporates some of London's theatreland. Part of the City of Westminster and Borough of Camden.

Holborn-Clerkenwell
Buffer zone between London's West End and the City of London financial district, home to the Inns of Court

South Bank
South side of the river Thames with good views of the city, several theatres and the London Eye

Westminster
A city in its own right, the seat of government and an almost endless list of historical and cultural sights, such as Buckingham Palace, The Palace of Westminster and Westminster Abbey

You can go to any zone But make note of one thing that far off places may be cheaper but will cost you more in terms of transport tickets. In London Don’t be too confident in public transport, as especially compared to other cities, there are often problems: signal failures, escalators repairs, station overcrowded, delay trains every day.

West London is generally more expensive than east, south and north. Hampstead with its nice, pleasant, peaceful areas, Little Venice, Notting Hill with the famous Portobello market, Kensington and Chelsea with the proximity of Hyde Park are among the highest prices. In contrast, South of the River (that’s how English people call the left bank) is cheaper. But you can also find expensive area such as Wimbledon there. Clapham is nice but can vary depending upon if you are at Clapham Common or South Clapham. Further, you can take the train at London Bridge and stay near more popular areas such as Bexley or Lewisham.

You can search for your room mate or flatmate in London online by going to the website of Easy Room Mate You can find rooms and also post free adverts for yourself or if you have a room to share in London you can place your ad as well.

A good reference is the Loot (https://www.loot.com/) and MoveFlat (https://www.moveflat.com/). This newspaper is published every few days and conveniently groups adverts from owner looking to sell, rent, or shared flats.

If you are already in London you can also buy Loot classified newspaper which lists all available room sharers in the week. The best day to buy the Loot (in any Newsagents) is the beginning of the week or the end (especially on Friday). However the Monday edition includes Sunday's adverts and the Saturday edition includes Friday's ads. Be quick as the sooner you will phone, the better your options will be. You can also find information in the Evening Standard (evening newspaper), particularly on Wednesday and during the weekend when you've got a huge section with adverts.

Instead of living in a pokey attic room with huge rent, why not try shared accommodation? Frequently associated with students, sharing is spreading nowadays towards older established workers and covers people from 18 to 49 years old. Without falling into a community style of life such as in the 70's, you can choose to share an accommodation for a bigger space, less expense.

Flatsharing is a way to meet more and more followers who choose to break a lonely life, save money or just find an affordable accommodation in a difficult market. This way of life has numerous advantages in term of money, practicality or social life.

If you look for a room or a flatshare, it's free to search into the database with thousands of offers.